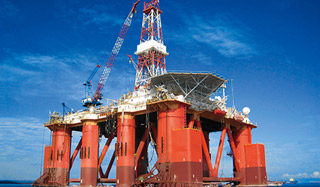 The current global offshore oil engineering equipment builders have formed three camps. Companies in the first camp are mainly in Europe and the United States, and they monopolize the development, design, general contracting of marine engineering equipment and the supply of key supporting equipment; the second camp is South Korea and Singapore, which have developed rapidly in the field of final assembly and construction, occupying a leading position; my country is still in the third camp of manufacturing low-end products. In recent years, the Chinese shipbuilding industry has made some new breakthroughs in the design and construction of marine engineering equipment. It has successfully built multi-type FPSOs and jack-up drilling platforms, completed the conversion and construction of foreign sixth-generation semi-submersible drilling platforms, and undertook domestic The orders for the 3,000-meter-deep semi-submersible drilling platform and the crane pipe-laying ship have had a large impact at home and abroad, and have the foundation for rapid improvement in technical capabilities.

In the past 10 years, 60% of the world’s newly discovered large-scale oil and gas fields have come from the ocean. It is estimated that by 2020, offshore oil will account for 35% of the world’s oil production, and offshore natural gas will account for 41%. At present, China's offshore oil accounts for less than 15% of the total oil production, which has huge potential for improvement. On October 18, 2010, the State Council announced the "Decision on Accelerating the Cultivation and Development of Strategic Emerging Industries", in which the high-end equipment manufacturing industry mentioned that it would vigorously develop marine engineering equipment for the development of marine resources. The biggest highlight of the "Twelfth Five-Year Plan" is that relevant companies will build another 50 million tons of production capacity on China's offshore continental shelf and continental slope during the "Twelfth Five-Year Plan" period. The total investment in offshore engineering equipment will exceed 250 billion yuan. In the next 5 years, my country will have more than 30 oil fields to be developed, more than 70 platforms will be built, and more than 10 FPSOs will be built and renovated. Among them, CNOOC will need to build 55 offshore platforms, 6 FPSOs, 4 land terminals, and laying subsea pipelines. More than 1,000 kilometers, the total investment will increase by more than 10 billion yuan every year, and ocean engineering equipment has broad market prospects.

This research and consulting report is based on a large number of thorough market research, mainly based on the World Energy Council, the National Bureau of Statistics, the National Development and Reform Commission, the State Oceanic Administration, and various domestic and foreign related newspapers and magazines, as well as the publication and provision of basic information and professional research units. A large amount of informative, statistically accurate information and data. First, it introduces the definition and scope of offshore engineering equipment, the current global oil market situation and the global offshore oil resource status, then analyzes the development of the global offshore oil industry, and then analyzes the global offshore oil equipment market pattern, industry scale, and competition status. A detailed analysis was carried out, followed by a detailed analysis of the development status of the global offshore platform equipment market, and then the status quo, competition and development of major equipment products in my country’s offshore oil equipment market. Introduced the offshore oil development strategic plans of the three major domestic oil giants and domestic offshore oil exploitation, analyzed domestic related equipment manufacturing companies, and finally predicted and analyzed the prospects of the domestic offshore oil equipment industry. It provides accurate market intelligence information and scientific information for relevant companies in this industry to gain insights into the fierce market competition, adjust their business strategies in time according to market demand, and provide strategic investors with appropriate investment opportunities and company leadership for strategic planning. The basis for decision-making is also of great reference value for the bank's credit department.

Scan the QR code to read on your phone

What products can we provide