(Summary description)Dongying is the location of Shengli Oilfield, my country's second largest oil field, and an important city in the Yellow River Delta. 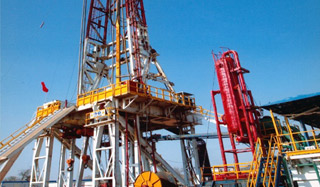 (Summary description)Dongying is the location of Shengli Oilfield, my country's second largest oil field, and an important city in the Yellow River Delta.

Dongying is the location of Shengli Oilfield, my country's second largest oil field, and an important city in the Yellow River Delta. Dongying, which used to be mainly supported by the petroleum industry, has been actively transforming and upgrading in recent years, becoming the only city in Shandong Province that is fully integrated into the two national strategies of the Yellow River Delta High-Efficiency Ecological Economic Zone and the Shandong Peninsula Blue Economic Zone. It has frequently achieved breakthroughs in the fields of industry and agriculture.

In the past 5 years, Dongying City, Shandong Province, which was born out of oil, faced the long-term downturn in the oil economy, rolled up its sleeves and pursued transformation and upgrading, showing its vigor and vitality——

In 2016, Dongying City achieved a gross production value of 347.96 billion yuan, with a per capita value of 164,000 yuan, ranking second among prefecture-level cities in the country, and ranking first in total and per capita among all oil cities in my country. The main business income of industry is 1.3 trillion yuan, ranking fourth in Shandong Province. The proportion of non-oil industries in the city's economy increased to 89.3%.

Accelerate the upgrading of traditional industries

Facing the downturn in the petroleum industry, Kerui Group, located in Dongying, is actively looking for a breakthrough. They found that the global oil and gas companies need parts and materials for operation and maintenance, the market space can reach 300 billion US dollars. To this end, they built the world's first online trading platform in the oil and gas field-Yi Rui e-commerce platform. Wang Yue, customer service of E-Rui e-commerce, told reporters that the platform achieved a total of 220 million US dollars in online transactions in the first half of the year.

To this end, they determined to focus on the cultivation of four major industrial clusters: petrochemicals and salt chemicals, rubber tires and auto parts, non-ferrous metals, and petroleum equipment. Focusing on the four major clusters, accelerate the transformation and upgrading of traditional industries.

The chemical industry accounts for half of all Dongying's industries. Beginning in 2015, Dongying took the lead in the province's remediation of chemical enterprises, drawing red lines for safety, environmental protection, and energy consumption. If the rectification fails to meet the standards, it will be resolutely shut down. The first round of rectification will eliminate 16.07 million tons of backward oil refining production capacity. At the same time, obsolete tire production capacity was eliminated in accordance with the law, increasing the city's capacity utilization rate in this industry from 74.2% to 96.9%.

While reducing production capacity, it guides the superior enterprises to a higher level. In accordance with the government's guidance and business operation thinking, Dongying has adopted strong measures to support the construction of innovation, testing, exhibition and sales, logistics and association "4+1" public service platforms for each key industrial cluster.

After technological transformation, more than 80% of the technological equipment of the city’s leading industries have reached the domestic advanced level. At present, Dongying's petroleum refining capacity is 69 million tons, accounting for about one-tenth of the country; the production capacity of radial tires is 168 million, accounting for one-fifth of the country; the output value of the petroleum equipment industry accounts for one-third of the country. Traditional industries are accelerating their upgrading driven by new momentum.

In Dongying, reporters from the Economic Daily also saw that a number of high-tech industries are growing. At Opal New Materials, graphene, which is as thin as a cicada's wings, shines under soft light. Opal New Materials and domestic authoritative organizations have jointly established my country's first graphene technical standard development and testing base, and realized the first batch of high-quality graphene mass production in China.

On the vast wasteland of the Yellow River Delta, a brand new plane soars in the blue sky. That was the civil aircraft test flight base built by COMAC attracted by Dongying City. Relying on the flight test base, the two parties are cooperating to build a flight test center, maintenance center, delivery center, production and operation base, training exchange base, and flight school. Dongying will become a civil aircraft 4S shop in the north.

The reporter learned that Dongying City has set up a scientific and technological achievement transformation fund of 20 million yuan to help 111 companies implement R&D expenses of 710 million yuan, vigorously cultivate new energy, new materials, new medicine, high-end equipment manufacturing and other industries, and strive to create a batch of 100 million yuan of emerging industry enterprises. In 2016, the city's high-tech industry output value was 248 billion yuan, accounting for 35.5% of the industrial output value above designated size. Dongying City has become a pilot city for the construction of a national scientific and technological innovation system, the first batch of national intellectual property demonstration cities, and has been rated as an advanced city for scientific and technological progress for six consecutive times.

Open up a new future for agriculture

In Dongying, there is a new organization that has been on the market for less than a year. It is low-key but ambitious: they hope to rely on technology to turn the coastal saline-alkali land into fertile land and build a world-class agricultural Silicon Valley. This is the Yellow River Delta Agricultural High-tech Industry Demonstration Zone directly under the Shandong Provincial Government and institutions located in Dongying. Guo Jiucheng, executive deputy director of the Administrative Committee of Agricultural High-tech Zone, told reporters that this is my country’s second national-level agricultural high-rise area after Yangling, Shaanxi. It will explore and develop and demonstrate in the comprehensive management of saline-alkali land, the development of modern agriculture, and the simultaneous advancement of the four modernizations. The planned area is 350 square kilometers, and the core area is 120 square kilometers.

The vast saline-alkali land is a major constraint to the sustainable development of Dongying, and it is also a huge potential reserve resource. The national implementation of the "Bohai Granary" technology demonstration project aimed at turning saline-alkali land into fertile land covers an area of ​​433,000 mu in Dongying City, accounting for 45% of Shandong Province. The city takes advantage of coastal land resources to expand and strengthen its advantageous industries such as green planting, modern fishery, and ecological animal husbandry. The factory production capacity of high-end edible fungi reaches 400,000 tons, there are 6 10,000-head dairy farms, and the Yellow River estuary sea cucumber breeding area is 25. There are 72,000 mu of intensive breeding area for hairy crabs in the Yellow River Estuary. Science and technology have opened up a new future for agriculture. The saline-alkali land and coastal beaches of Dongying are becoming new growth points and cornucopia. (Economic Daily, China Economic Net reporter Guan Bin Shan Baojiang)

talk about my sense of gain:

good days are yet to come

As a retired old man, I am very concerned about the development of Dongying and also the changes around me. In the past few years, there has been a new word called "sense of gain". From the perspective of a retired old man, people nowadays are getting more and more things, getting better and better. It is not what it used to be.

Let me talk about ecology first. In the past, there was a lot of pollution, with heavy smoke from enterprises and waste water being discharged at will. The smell in the air made people uncomfortable. The people have always been dissatisfied with the pollution problem. Well, the investment in environmental governance is unprecedented. Any company that cannot solve the pollution problem will not only be punished, but some will shut down and stop production. Nowadays, the air is getting better and better, the environment is getting more and more beautiful, the trees are shaded, the wetland is surrounded by trees, the stars are seen at night, the blue sky is seen during the day, and the living environment of the people is getting more and more comfortable.

In addition to the ecological environment, the cultural life of the people has also become colorful, and cultural squares are blooming everywhere. I like Lu Opera. Lu Opera is a traditional type of opera. Many of the shows are about things around you. They are entertaining and entertaining. They used to watch and listen on TV and radio. Now from May to September, Monday to Friday, there are many in the city. Large-scale theatrical performances are held at the performance sites, and you can watch the show at your doorstep, whether in the city or in the countryside.

Nowadays, the cultural life of Dongying people can be seen everywhere. I went to a bank a few days ago and saw that there was a "Science Bank" set up inside. I was waiting for the business to take a book and read it carefully in a quiet environment. After a while, it was listed. Last year, the farmhouse bookstore also realized the loan and return with the library. It is really much more convenient for people who want to read and study.

The 19th National Congress of the Party is about to be held, and the people in Dongying are looking forward to it. In recent years, the Party Central Committee has led well, and the people of Dongying in Dongying have done well, and their lives have become better and better. I believe that the 19th National Congress of the Communist Party of China will have more good policies to make China stronger in the world, and make people’s families wealthier and happier! Good days are yet to come!   (Reporter Shan Baojiang)

Scan the QR code to read on your phone

What products can we provide